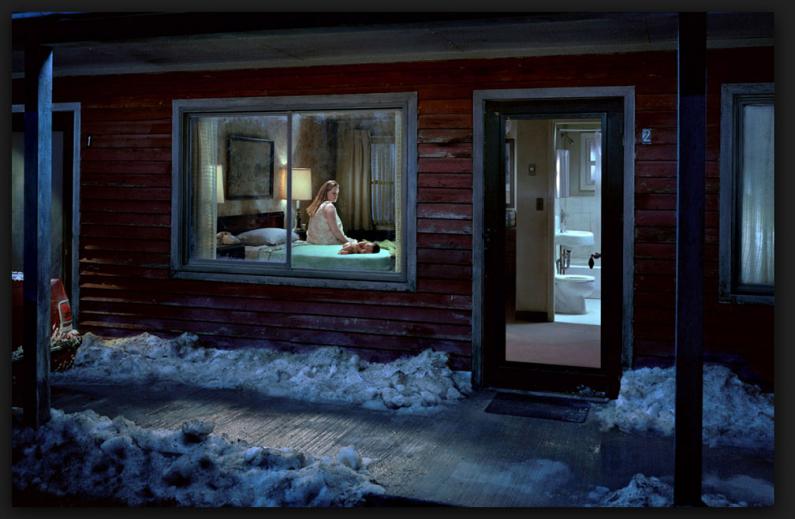 Photographic fictional narratives read like fairytales or novellas rather than memoirs – they create a space for the viewer to interpret dreams, symbols, and characters – either collective or intimate stories told in metaphors rather than facts. They leave clues rather than solve mysteries. Many times, they are constructed by the artist with a specific intention in mind – a staged setting, art directed gazes and gestures, and allegorical metaphors. In other words, the photographic genre of personal narrative implies that an image tells a story that signifies meaning but doesn’t explain the meaning directly. 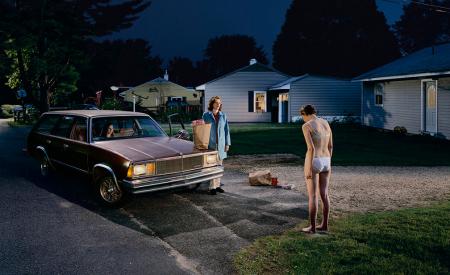 Narrative imagery stands alone in a frame unwilling to rely on other images from a series to support its purpose. Fictional narratives reach the peak of storytelling and prose when referencing the dream-like cinematic states of Gregory Crewdson, the intimate relational tales of David Hilliard, and the shadowy fairytale Svala’s Saga in the work of Emma Powell.

The work of Gregory Crewdson is synonymous with fictional narrative. His images are tableau-like movie stills complete with cinematic lighting and actors who portray mysterious characters with indecipherable gesture sand deadpan gazes. The son of a psychoanalyst, Crewdson’s imagery explores fantasies gone awry with repetitive symbols of open car doors, windows, mirrors, and lighting that looks as if it shines directly on the scene from heaven above or from an unidentified flying object in the distance.

David Hilliard narrates intimate stories of relationships about family or lovers set in panoramic formats that combine several images divided by white borders. The borders split the scene although the story is continuous. At times, the images align perfectly between frames while others are misaligned by the artist’s changing viewpoint or camera focus causing the viewer to pause at a shifting moment within the storytelling process. Relationships are created as well as severed by Hilliard’s frame. His stories often play out with characters in quiet desperation that represent isolation and dislocation. 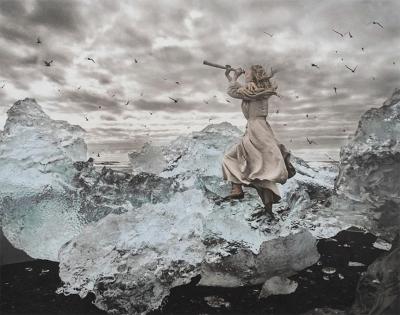 Emma Powell creates a mythical narrative set in Iceland in her series Svala’s Saga where her heroine investigates the sudden loss of the world’s birds. Powell juxtaposes her character with ominous landscapes and textural rock formations in the muted tones of palladium over pigment ink printing. The story emotionally twists and turns in wild backdrops as Svala searches for the last remaining eggs: symbols of life, fertility, and rebirth.

Because photographic narratives are tied to the practice of contemporary photography and the relationship to the viewer, the term is difficult to define in specifics. And while much is written about this genre of photography, there are no precise guidelines nor overarching characteristics that define it other than the storytelling quality of the imagery. However, by the examples of notorious photographers like Crewdson, Hilliard, and Powell, one can derive that narrative photography typically entails the photographer set the scene solely for the photograph with forethought and planning rather than spontaneous capture. Furthermore, at its best, personal narratives create curiosity while recounting stories with unique endings for each viewer.