“My work is about the transitory nature of the physical world and the enchantment and power of the natural world, often reflected through the eyes of animals or children. Whether photographing people or animals, I capture what they wish to give, not what I construct. A sense of myth, ritual and mystery binds these images together. I’m drawn to wilderness places, children and animals. I’m influenced by literature, especially by the Romantic poets, T.S. Eliot, and Flannery O’Connor. My photographs are about the mystery that lies beneath the mundane.”

Anne Berry is an artist from Atlanta, Georgia. She is best known for photographs of children and animals that capture the enchantment and power of the natural world. She earned an MA in literature from The University of Georgia and a BA in art and English from Sweet Briar College. In 2013 and 2014 Critical Mass included her work in their Top 50 Portfolios. Anne has had solo exhibitions at the Centre for Visual and Performing Arts in Newnan, GA, The Lamar Dodd Art Center in LaGrange, GA and The Rankin Arts Center in Columbus, GA. She has exhibited nationally and internationally, including The Fox Talbot Museum in Lacock, England, SCAN Tarragona in Spain, The Museum of Photographic Arts in San Diego, and the Ogden Museum of Southern Arts in New Orleans. Books include Through Glass (North Light Press, 2014) and Primates (21st Editions, 2017). Anne’s work is featured in National Geographic Proof, Feature Shoot, The Flannery O’Connor Review, Hufffington Post and Lens Culture, among others. Anne is a founding member of the Pigs Fly Photography Collective, and she runs Pigs Fly Retreats with Lori Vrba. In 2017 The Dishman Museum of Art and The Greensboro Project Space hosted their traveling exhibition, Intrusions of Grace. Anne lives in Newnan, GA and is represented by Catherine Couturier Gallery in Houston, TX.

See some of her work and learn about Pigs Fly Retreats here. 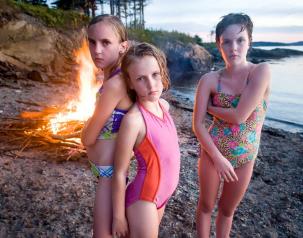