Susan Burnstine is an award winning fine art and commercial photographer, originally from Chicago and now based in Los Angeles. Susan is represented in galleries across the world, widely published throughout the globe and conducts workshops at Maine Media and Santa Fe Workshops.

Susan’s first monograph, Within Shadows, was published in 2011. Her second monograph, Absence of Being, is currently being released. Both are available on her website and through Amazon. Her prints are available through a number of galleries in the US and abroad.

Susan Burnstine is one of the few photographers today avidly pursuing alternative processes to create an idiosyncratic and deeply personal visual landscape. Initially, Burnstine sought to find a way to portray her dream-like visions entirely in-camera, rather than with post-processing digital manipulations. To achieve this, she has created twenty-one handmade film cameras and lenses that are frequently unpredictable and technically challenging. The cameras are primarily made out of plastic, vintage camera parts, and random household objects, with single-element lenses molded from plastic and rubber. Learning to overcome their extensive optical limitations required Burnstine to rely on instinct and intuition—the same tools that are key when attempting to interpret dreams. 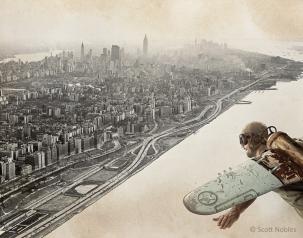